For the past 30 years, Sviaz-Expocomm 2015 has been one of the most prominent telecommunications, software and IT industry events for Russia, the CIS and the Eastern Europe regions. This year, over the 4 days of the exhibition, more than 20,000 participants attended the event held in Moscow, with participants including politicians and public figures, representatives of the leading mass media, industry experts, company owners and C-level executives. 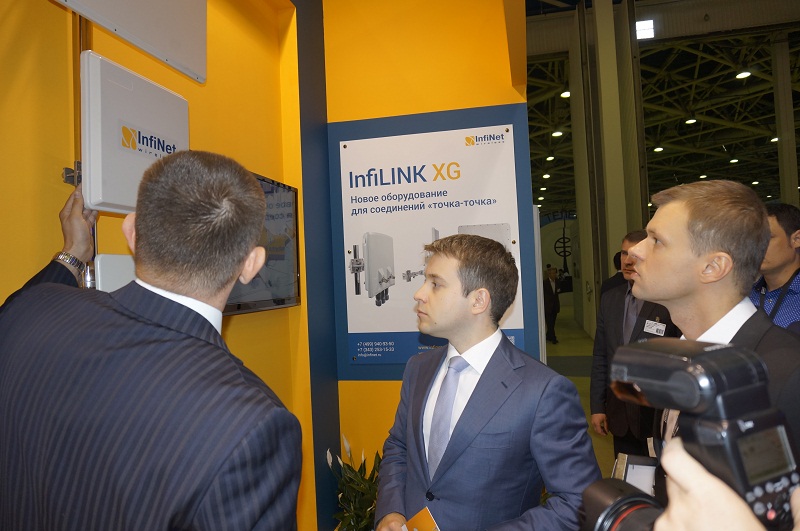 A visit to InfiNet Wireless’s stand from the Russian Ministerial delegation - headed by Nikolai Nikiforov, the Minister for Telecom and Mass Communications of the Russian Federation -  was one of the highlights of an overall successful event for the InfiNet Wireless team.

InfiNet Wireless exhibited a wide range of products and solutions at the exhibition, including its flagship InfiLINK XG series of Broadband Wireless Access (BWA) products, as well as premièring a number of new developments including a synchronization solution that dramatically increases the spectral efficiency of point-to-point (P2P) and point-to-multipoint (P2MP) systems, and a new lightning protection unit that offers unrivalled protection against lightning strikes to exposed wireless installations.

The exhibition also brought success to InfiNet Wireless through the finalization of a number of new contracts with long-standing partners, as well as with several new customers - including agreements with Vympelcom, MegaFon, Rostelecom, Transtelekom, ER Telecom. As a result, expansion into Armenia, Belarus and Azerbaijan will take place in the very near future. InfiNet Wireless’s presence at Sviaz-Expocomm also presented the opportunity to play host to a number of technology partners and suppliers, with successful negotiations being held with companies.